At 2o2o was made a decision to relaunch Aeronatical Department in Riga. Dartz Motorz takes that vision as an inspiration for a future where drones will complement our style and panache. They want to change the image of drones from being mere toys or industrial assets to that being an accessory that enhances the owner’s individuality. Dubbed the Dartz PromDrone Black Bee, it is co-developed with drone pros Fixar who’ve given it the advantages of a helicopter and unmanned aircraft while doing away with the disadvantages of tilt rotors. The designed by Alexander Isaev drone based on the Fixar 007 Outdoor model can take off and land like a copter and also has a high flight range courtesy of the wing lift. The design is such that the transition from the helicopter mode to the aircraft mode is seamless. 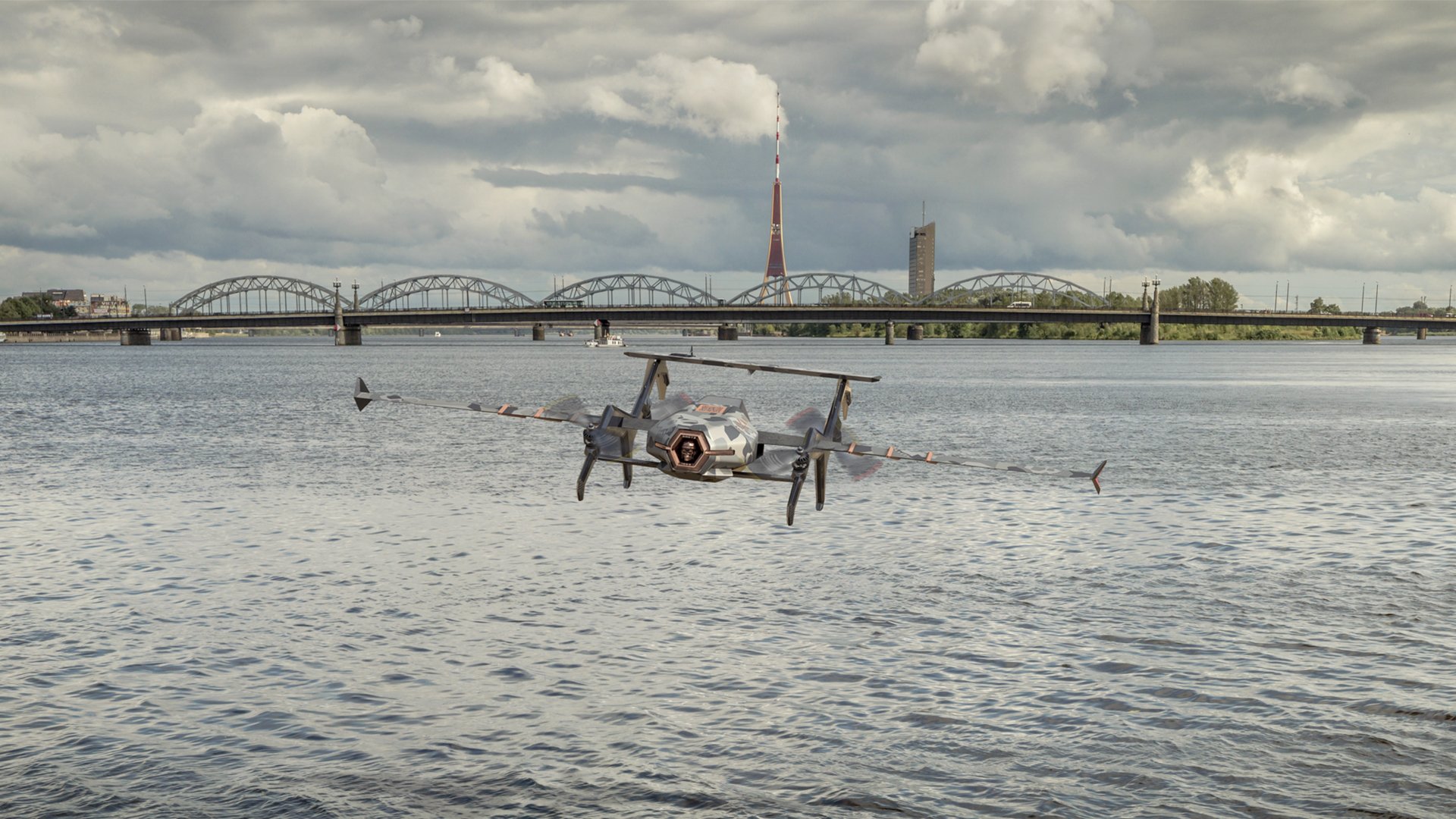 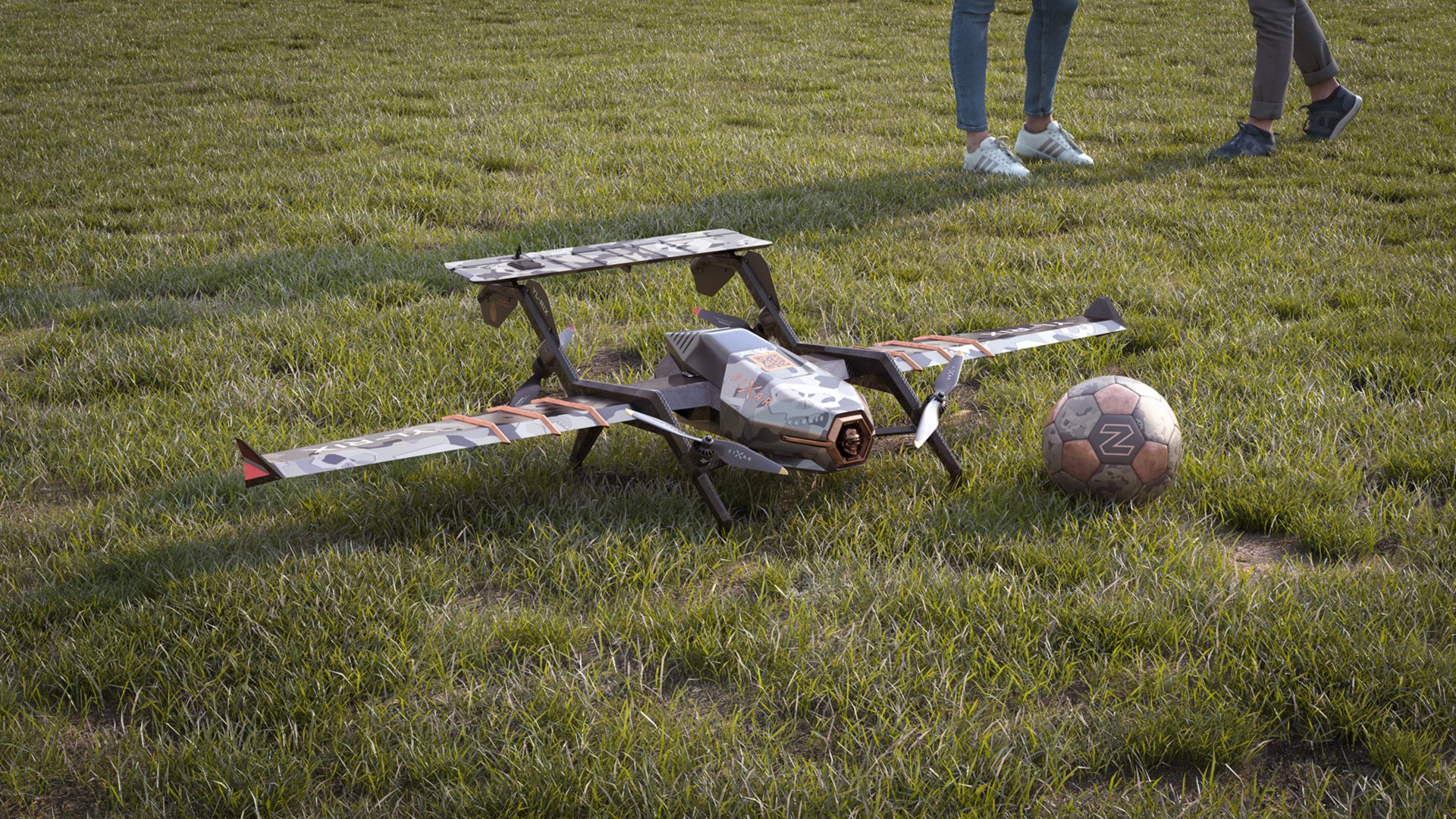 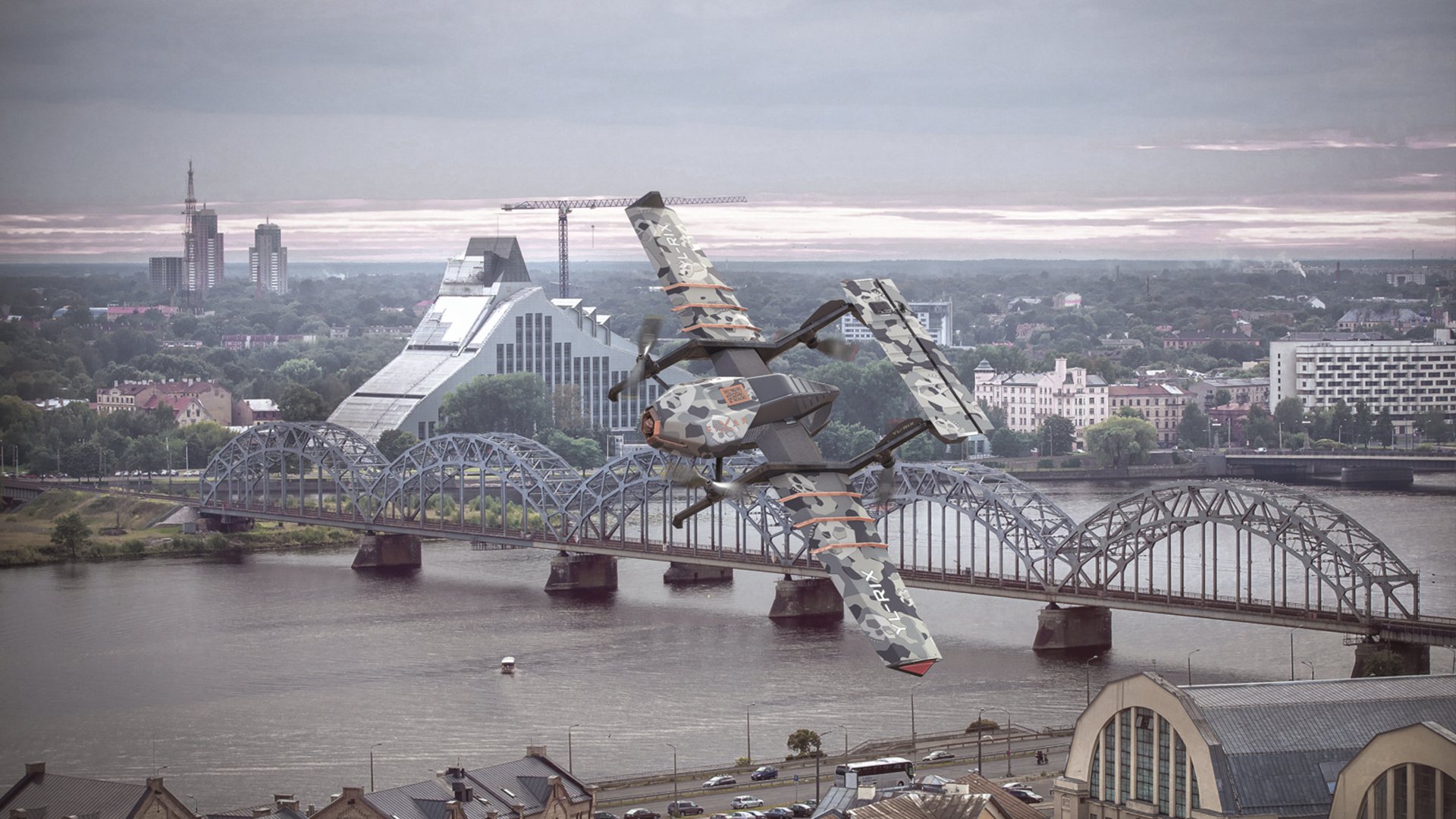 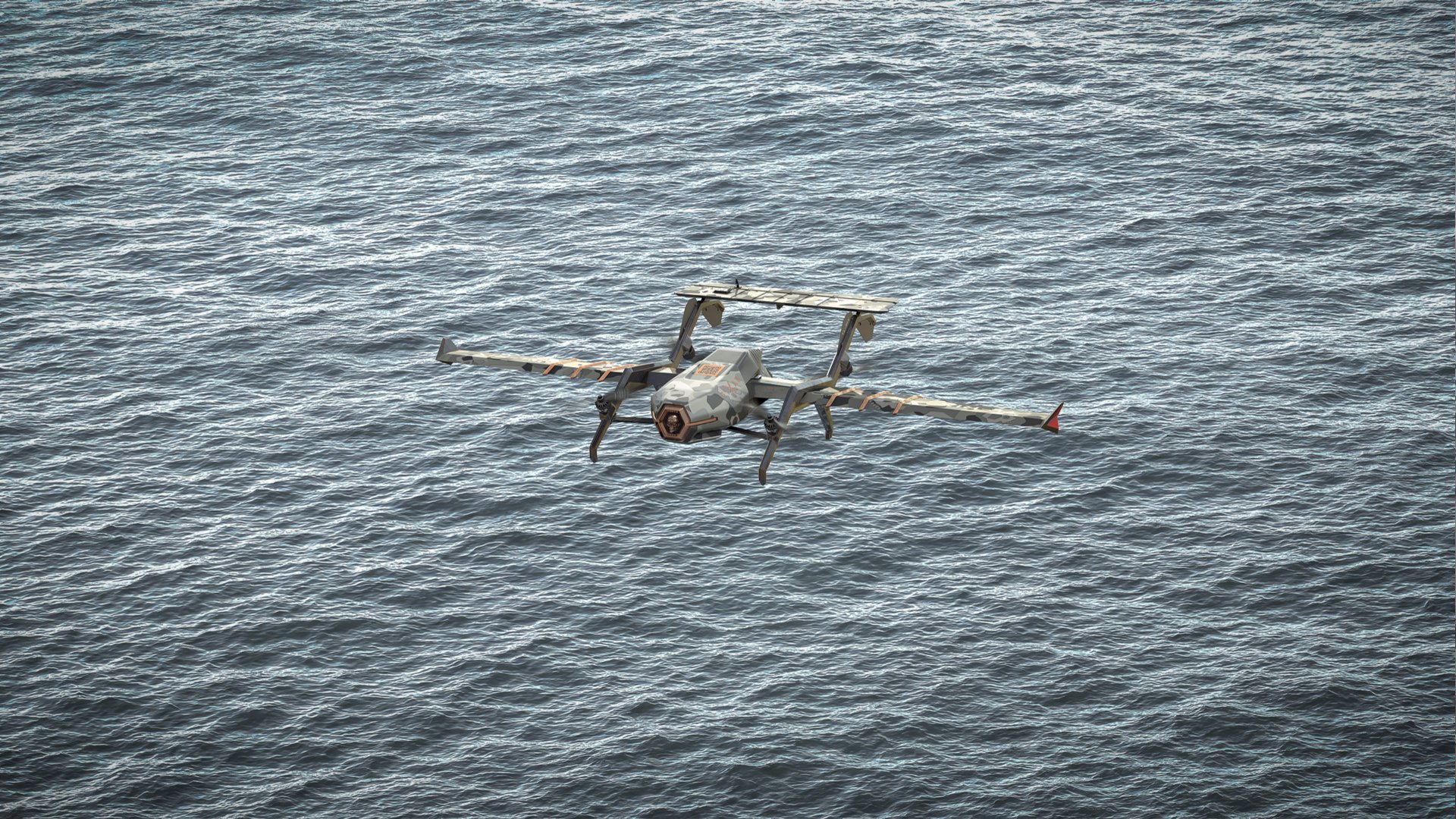 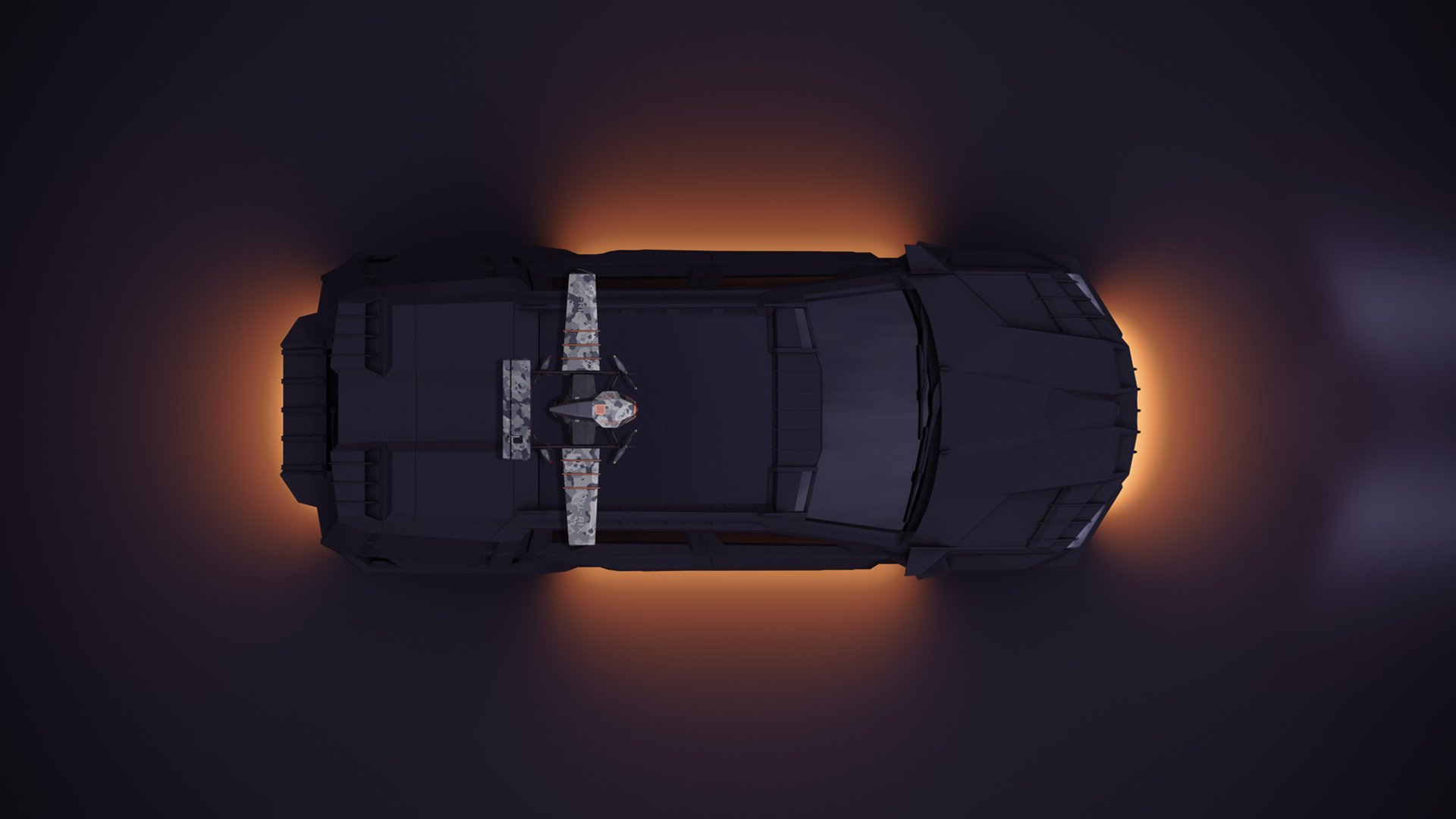 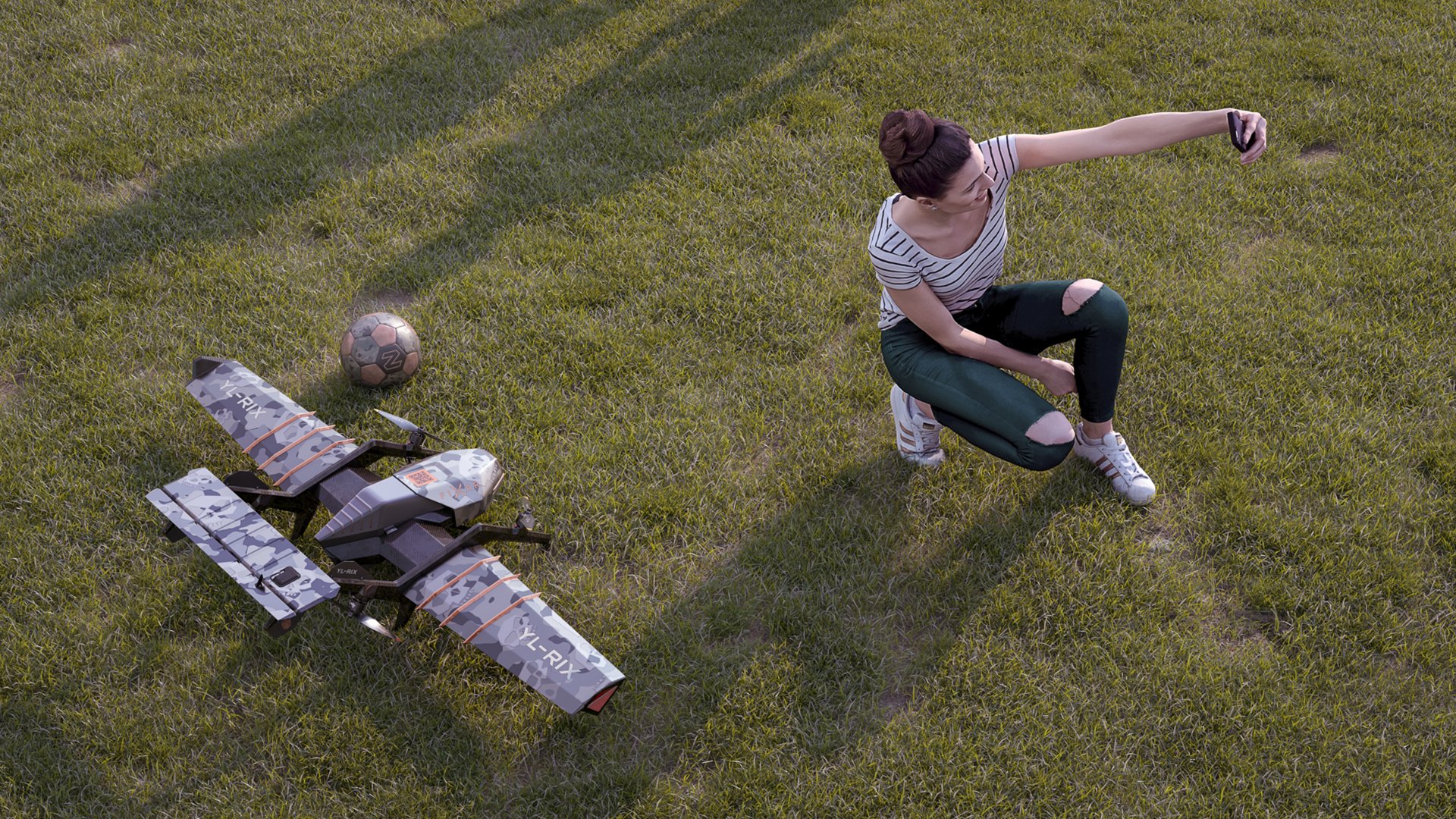 On June 19, 1910, the Board of the Joint Stock Company Russian-Baltic Carriage Works in Riga announced to the Main Engineering Department about the creation of an aeronautical department at the plant. In 1911, an aviation workshop appeared in Riga as part of the enterprise, which began to build Sommer vehicles based on the French model. In January 1911 “RBVZ” was invited railway engineer A.S.Kudashev who built that time in Kiev, the first Russian aircraft to its design, and later two more inventors-designers: process engineer I.I.Volovsky and Engineer I M. Gakkel . One of the first Russian aviators Vladimir (Voldemar) Fedorovich Smith tested the built Sommer vehicles . Pilot Vladimir (Voldemar) Fedorovich Smith at the first copy of the Sommer-RBVZ aircraft, before the first test flight. March 6, 1911 The flight of the pilot VF Smith on the first copy of the Sommer-RBVZ aircraft.
On May 25, 1911, during a demonstration flight on the Sommer-RBVZ, pilot VF Smith died. The cause of the disaster is the failure of the control system. After that, further production of the aircraft developed by Roger Sommer, a student of Henri Farman, at RBVZ was discontinued.

The aircraft workshop grew as the activities of the aviation school developed: initially, a small number of workers quickly increased to 25-30 people. After the aeronautical exhibition, due to the clarified expediency of separating the aircraft plant from the carriage plant, on May 27, 1911, the aircraft workshop in Riga was closed.

At the suggestion of MV Shidlovsky, Chairman of the Board of Directors of Joint Stock Company RBVZ, in 1912, a new aviation workshop was opened in St. Petersburg on Stroganovskaya Embankment, at the RBVZ car garage. For her, in the fall of 1911, an order was received for the production of airplanes of the “Farman”, “Bleriot”, “Nieuport” types under license.

M.V.Shidlovsky had been looking for a competent specialist for a long time, capable of leading the engineering and design personnel. Considered the candidacy of A.S. Kudashev , Ya.M. Gakkel , who created the first successfully flying domestic aircraft. In March 1912, an agreement was signed with Igor Ivanovich Sikorsky for the construction of aircraft designed by him. MV Shidlovsky was inclined to appoint II Sikorsky as chief engineer and designer of the RBVZ aviation department. II Sikorsky, having assumed the position of chief engineer and designer of the aviation department of “RBVZ”, managed to transform the workshop into an aircraft plant.

In 1912-1913, a number of single-engine aircraft designed by Sikorsky were built, including the S-6B and S-10 biplanes (winners of military airplane competitions in 1912 and 1913), the S-11 and S-12 monoplanes produced in a small series , seaplanes-biplanes C-5a and C-10 “Hydro” , adopted in a small number of copies by the Maritime Department. For further work on the problems of hydroaviation “RBVZ” equipped an experienced hydrodynamic pool for testing models. Single-float version of the C-5A seaplane. C-10 “Hydro” in the courtyard of the Russian-Baltic plant. The S-11A aircraft at the 1913 airplane competition Aircraft S-12.
In 1913, I.I. Sikorsky began to create multi-engine aircraft. Rumors of a huge flying machine being built by Russo-Balt were creeping through the capital. Most aviation specialists did not believe in the possibility of creating a large aircraft. Many gave examples, referring to the creations of nature, which created flying creatures of certain sizes and weights. The ostrich, they say, a heavy and bulky bird can only run on the ground – and then the well-wishers drew an analogy with a large airplane. Sikorsky stubbornly defended his views. Factory people, generous with all sorts of nicknames, christened the plane “Grand”which meant “Big”. This brilliant name was firmly stuck and it even officially began to be called that. In February 1913, all parts of the aircraft were basically ready. The general assembly of the “Grand” was carried out at the Commandant airfield and was completed by the end of April 1913. On April 27, Sikorsky took off the twin-engine version of the Grand for the first time; on May 6, the Grand took off, on which two more engines were installed, installing them in tandem with the already standing ones. In June 1913, the aircraft was upgraded again. The rear engines were removed and installed in a row on the lower fender. This was a revolutionary decision. No one else in the world has dared to arrange such a power plant. The first flight of the “Grand” with in-line engines took place on June 23, 1913. The plane got its famous name – “Russian Knight” . Construction of hangars of the Aviation Department of RBVZ at the Commandant airfield.

“Grand-Baltic” with a tandem arrangement of 4 engines. Emperor Nicholas II examines the “Russian Knight”.
The flights of the “Russian Knight” fully confirmed the possibility of creating heavy multi-engine aircraft, and the Ministry of War showed its interest in such aircraft. Since August 1913, at the Russian-Baltic Carriage Works (RBVZ), the construction of a prototype of a new four-engine heavy airplane began, which was named in honor of the Russian epic hero “Ilya Muromets”(it became a common name for various modifications of this machine, which was built at the plant from 1913 to 1917.). The prototype No. 107 was ready in December 1913 and the first flight was made on the 10th. After successful tests and a number of achievements, the Main Military-Technical Directorate (GVTU) signed on May 12, 1914, contract No. 2685/1515 with RBVZ for the construction of 10 more aircraft of this type. Soon aircraft of this type became the main product of the plant. The aviation department of the Joint Stock Company “Russian-Baltic Carriage Works” was the only enterprise in Russia that produced heavy multi-engine bombers. Bomber “Ilya Muromets” series B.
After the outbreak of the First World War, the Muromtsev detachments carried out combat missions for reconnaissance of the enemy. In December 1914, at the suggestion of M.V. Shidlovsky, they were brought together to the Air Squadron. Shidlovsky was appointed head of the squadron, who was called up for military service, having been awarded the rank of major general. I.I.Sikorsky acted as a technical advisor to the Squadron.
Since 1915, the RBVZ began the serial construction of the C-16 training aircraft and fighter (it was also referred to as the C-XVI). The maximum speed reached 143-144 km / h. Thus, the plant was one of the few enterprises in Russia that mainly produced machines of domestic design. A batch of S-16 fighters near the factory hangar.
After the outbreak of the First World War, the chairman of the board of the Russian-Baltic Plant announced a competition to create an aircraft engine for the Ilya Muromets aircraft. The new engine was to replace the German “Argus” engine, which had ceased to be supplied in connection with the outbreak of the First World War. The competition was attended by two groups of designers. Engineer V.V. Kireev led the first group located in Riga at the Russian-Baltic plant. II Sikorsky headed the second group, which was located in Petrograd at the Mechanical Plant “RBVZ”. II Sikorsky’s motor copied “Argus” in 140 hp. VV Kireev’s engine was based on the design of the 150 hp Benz engine. Motor Kireev was recognized as the best and began to prepare its serial production in Riga. The engine was a two-stroke, six-cylinder, water-cooled, cylinders arranged in a row. Automotive-type radiators were located on its sides. The screw was connected directly to the motor shaft, there was no gearbox. In the summer of 1915, when the Germans approached Riga, the RBVZ was evacuated to Petrograd, Moscow and Tver (the Automobile Department was evacuated to Moscow, the Carriage Building Department was evacuated to Tver). On the Vasilievsky Island of Petrograd, the RBVZ Mechanical Plant appeared, and on the basis of the aviation department, actually two production facilities were formed: the old one on the Stroganovskaya embankment and the new one near the Korpusnoy airfield. The latter specialized in assembling “Muromtsev”. All of these enterprises were closely related to each other.

The following figures indicate the intensity of the development of aviation production on the Stroganovskaya embankment in the first two years of the war: if in the first half of 1914 only 270 people worked at the plant for 9 hours a day, then at the end of 1914 – 470 people for 10-11 hours, out of there are 230 of them in the machine shop, 111 in the carpentry shop, 74 in the assembly shop, and 29 in the painting shop. The machine shop consisted of 18 woodworking machines, 15 screw-cutting lathes, 2 revolving machines, 2 automatic ones, 1 milling machine, 5 drilling machines, 1 slotting machine. The director of the aviation department (during the war years it was sometimes called “Aviabalt”) was MF Klimikseev. NN Polikarpov began his aviation and engineering activities at Aviabalt, the future famous aircraft designer. Sikorsky instructed a young engineer to conduct a study of the floats of a hydroaeroplane for future design developments.

In the summer of 197, an experimental series of S-20 aircraft in the amount of 5 copies was built at RBVZ . But they did not manage to bring the production of this Sikorsky fighter to large series …

Fighter S-20.
After the coups d’état of 1917, the Russian-Baltic Aeronautical Plant of the Russian-Baltic Carriage Works JSC was confiscated by the resolution of the Economic Council of the Northern Region of September 25, 1918, in November 1920 it was renamed into the Russian-Baltic Aircraft Plant No. 2 (branch No. 2 ) Petrograd State United Aircraft Plant. In 1920, the aviation department was merged with the “VA Lebedev Aviation Plant” and the “Gamayun” plant of SS Shchetinin and received a new name – State Aviation Plant No. 3 (GAZ No. 3). Later renamed into “Red Pilot”. Later the name changed several times: “Plant No. 23”, “Plant No. 272”. The production profile was preserved – airplanes, and later helicopters.